Through Newsweek Expert Forum, April Margulies Explores Her Voice As a Thought Leader 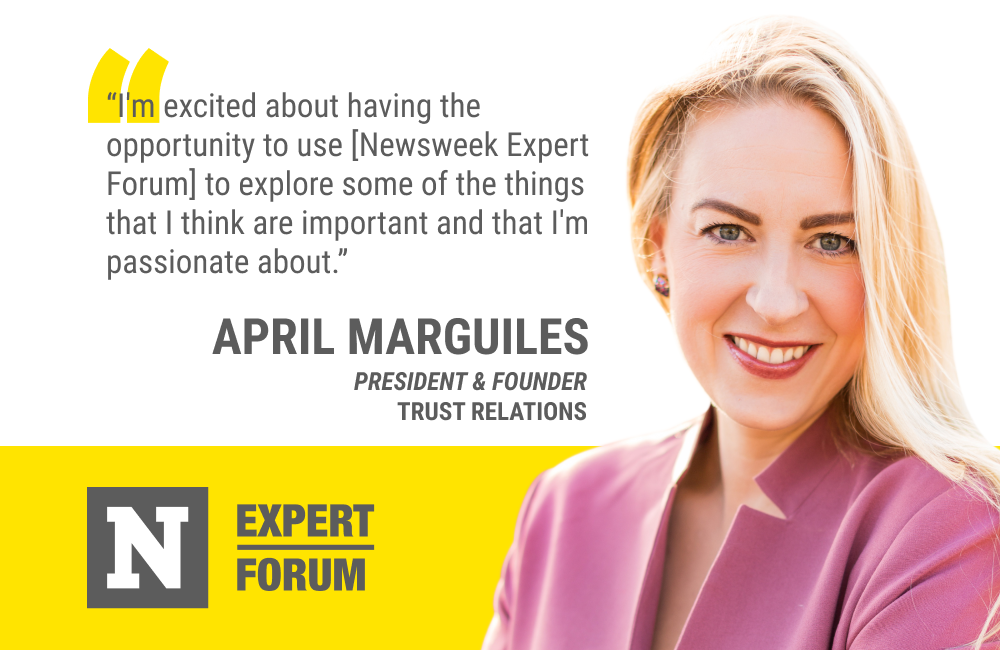 April Margulies had been working as a PR professional at various top agencies in New York for several years when she decided to move to Los Angeles in 2014. She assumed she’d get another agency job, and freelanced while she looked for the right opportunity. “I discovered very quickly that PR in New York and LA are very different,” Margulies recalls. In New York, she had enjoyed working with corporate executives to develop strategies related to business goals. But when she began interviewing at agencies in LA, she found that the focus was more on entertainment and celebrity. “That’s not really what I do, so I realized I needed to do my own thing,” she says.

Margulies continued to freelance for various agencies in LA, but her work as a consultant reacquainted her with what she describes as “toxic” corporate cultures. “I realized that I wanted to create something that didn't exist — a nice place to work that was respectful of people,” she says. “Not a sweatshop, not an environment where people felt taken advantage of if they were junior.” She conceived of a virtual agency that would not only reduce her overhead, but allow her to work with talented people from just about anywhere.

Drawing on her network, Margulies assembled a group of freelancers, some of whom eventually became employees. “Now we have a mix of nine full-time people and contractors from Hawaii to New York, and many places in between,” she says. And she’s creating the kind of inclusive and supportive corporate culture that was once so difficult for her to find. That ethos applies to clients as well. She named her company Trust Relations because she thinks that traditional public relations, with its frequent emphasis on spin, is obsolete. “You can't get by with that in the social media environment we live in,” she says. “You have to be actively doing what you want people to believe about you. And I feel like “trust relations” is a better reflection of that.”

"I’m not just running a company, but also trying to project into the future where the company should go based on where the world is going. [Newsweek Expert Forum was] a good opportunity for me to start exploring my voice as a thought leader.”

Rather than identifying a specific niche, Margulies positioned her company as a generalist agency that distinguishes itself with its ability to tap multiple audiences. “We tend to excel at working with companies that need business coverage, plus consumer and tech, and maybe some trade coverage,” she says. For instance, Trust Relations worked with Suzy, a consumer insights platform, to increase visibility with big brands, and also helped the company get tech and business press when it landed a big round of venture capital funding.

Because the company was already virtual, the pandemic had little negative impact on Trust Relations. Margulies says she even signed on a few new clients. “There were a lot of people who had passion projects that maybe they were never going to launch,” she says. “And then they were laid off and this was their moment. We had a lot of clients who were coming out of the woodwork, ready to launch their life’s  dream, which was really fun.” For example, the company helped two entrepreneurial sisters launch Renwick Golf, an athletic lifestyle brand of clothing for female golfers.

As a member of Newsweek Expert Forum, Margulies says “I'm excited about having the opportunity to use that platform to explore some of the things that I think are important and that I'm passionate about.” She had spent her career helping others amplify their brands, but realized that many recognizable and well-branded agencies had leaders who were highly visible and vocal about their own visions as well as industry trends. “I've realized that part of my role to grow the company is going to be paying attention to issues, researching them, and writing about them,” Margulies says. “I’m not just running a company, but also trying to project into the future where the company should go based on where the world is going.” Newsweek Expert Forum was “a good opportunity for me to start exploring my voice as a thought leader,” she says. “It allows me to write about topics that are a little broader for an audience that’s interested in a 10,000 foot view.”