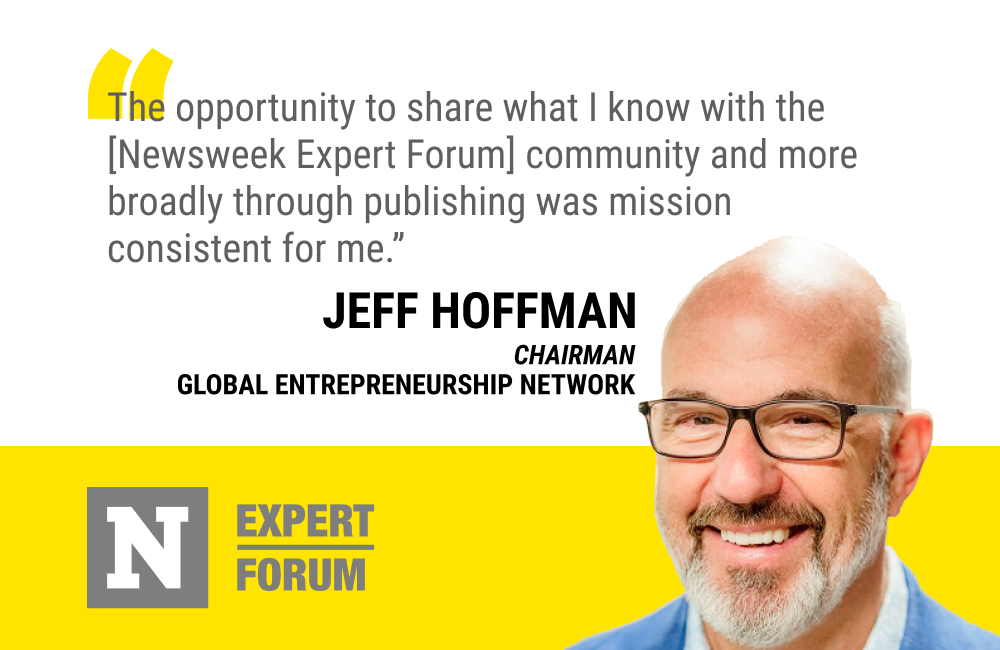 Throughout his career, Jeff Hoffman has started and been involved in many high profile, successful companies, including Priceline.com/Booking.com, uBid.com, and others. Now, he says, “I’ve made a commitment to mentoring at this phase of my life, and to giving back.” So he’s teaching others what he knows best: how to launch and scale companies, and how to innovate.

Hoffman lends his expertise to several organizations, including Global Entrepreneurship Network (GEN), of which he is chairman. GEN has projects in 170 countries, aimed at helping people launch and scale companies through collaboration with entrepreneurs, investors, researchers, and various support organizations. “One of our biggest programs is the Entrepreneurship World Cup,” says Hoffman. “It’s probably the world’s biggest pitch competition. This year, we had over 175,000 entrepreneurs in 200 countries apply.”

Additionally, Hoffman is a founding board member and long-time mentor at Unreasonable Group, a global organization that supports growth-stage entrepreneurs who are trying to solve seemingly intractable world problems. He teaches master classes and also mentors individual entrepreneurs. He’s also an advisor to Dream Tank, which gets kids involved in building solutions to economic and environmental problems in their communities. Large, established companies also benefit from Hoffman’s expertise. He teaches innovation workshops at companies such as Nestle, Hewlett Packard, and Microsoft.

"[Newsweek Expert Forum] is a diverse group of people with different backgrounds, different perspectives, and different areas of expertise. So everyone has something to share that everyone can learn from.”

With decades of experience running companies and through his mentoring activities, Hoffman has identified a few common tenets that he imparts upon the entrepreneurs he helps. Among them are:

This summer, Hoffman anticipates seeing a new pet project come to fruition. He’s been working on a new TV show called Going Public, a ten-episode series that will take five companies public on the NASDAQ and allow viewers to invest at the same time as institutional investors. Some of the companies have been identified but have not yet been announced. However, Hoffman hints that the first company will be female-owned and that the show will have a commitment to entrepreneurs who have typically been underrepresented in the IPO world. The show is hosted by Lauren Simmons, the youngest-ever female trader on the New York Stock Exchange; Hoffman will appear in the show as a mentor to the entrepreneurs.

Hoffman says he was drawn to Newsweek Expert Forum because it fits in perfectly with current focus. “I’m trying to share everything I’ve learned about how to build businesses and how to scale them,” he says. “The opportunity to share what I know with the community and more broadly through publishing was mission consistent for me.” Secondly, he was impressed with the forum's overall composition. “It’s a diverse group of people with different backgrounds, different perspectives, and different areas of expertise,” he says. “So everyone has something to share that everyone can learn from.”