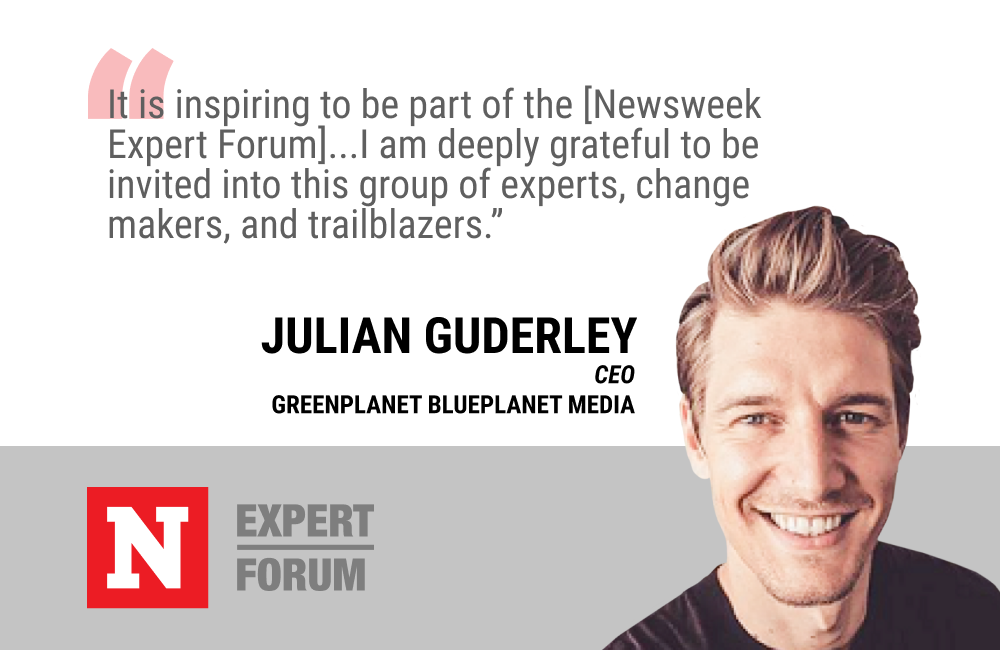 In his youth, Julian Guderley, founder of GreenPlanet BluePlanet MEDIA, traveled the world, was an international exchange student, and learned five languages before he was 20. He spent a decade “flowing in that polyglot energy, being able to connect with people, immerse myself, and understand that there are a lot of different perspectives on the planet.”

Initially, he followed a somewhat traditional career path, working for Nike as a retail brand ambassador, and then for BMW, where he hosted premium events. At one of those events, in Vancouver, he had an epiphany. “Someone drove up to the venue in an electric vehicle, in this remote location on Cypress Mountain, and says, ‘can I please plug in my car?’” That was ten years ago, before Tesla became popular, and Guderley was stunned. “If this was a movie, there would have been  a soundtrack like the cosmic heaven portals opening,” recalls Guderley. What on earth was he doing promoting cars that ran on fossil fuels (“no disrespect to BMW”)?  “The week after that, I quit my job,” he says, “and for eight or nine months I I did close to nothing but just listen for what would be the next thing to do that actually aligned with my values, and how I can be of support to not just my own personal clarity and security but also to something that matters.”

He ran his own yoga and meditation studio, hosted events with guest speakers, and then made a detour into digital marketing, working with a startup that launched a conversation starting app. The company failed but, says Guderley, “I learned a lot about startups and how they use me and my energy.” He decided to put that energy to better use  by launching his own podcast, GreenPlanet BluePlanet, an antidote to what Guderley calls “the gloom and doom narrative” when it comes to the environment. “It’s not really true that we have no way out,” he says. “We just don’t talk about the way forward and focus on it enough.”

“It is inspiring to be part of the Forum and add my flavor of planetary thinking, regenerative culture, and venture capital connectivity. [I'm] always curious to connect with peers, community, and audience.”

Guderley’s goal was to find 500 people who are “creating social impact for a planet that will one day be pollution free or in alignment with nature” and to do in-depth interviews with them on their work. So far, he’s done 250 interviews and is reaching half a million people every month across multiple platforms. His guests include socio-environmental advocate Céline S. Cousteau (grand-daughter of Jacques Cousteau), astronaut and humanitarian Ron Garan, and geodesic dome entrepreneur Morgen Biershenk. “My goal is to create a space for those who want to have inspiring conversations and want to look at what’s next. It doesn't mean that we don't still have problems or challenges. But this is where real leadership comes in. It's about resilience with challenging situations.” In addition to the podcast, Guderley also coaches executives and leaders who want to add purpose and social impact to their lives and careers.

Recently, Guderley joined Planet Positive Ventures, a venture capital think tank and investment advisory firm that focuses on social impact investing. His motivation for joining the firm as a partner is twofold, he says. First, he notes that it’s easier and more efficient to have an impact when working with a group of like-minded people, as opposed to going solo. Secondly, he believes he can play a role in directing some of the wealth that the millennial generation is inheriting from its baby boomer parents. “That money wants to go places,” says Guderley. “There are thousands of entrepreneurs with great ideas and companies that are both profitable and purposeful, and in harmony with the planet. But there needs to be an organization that says, ‘hey, this is actually a smart investment and here’s why.’” The firm invests in companies directly, and also advises clients on social impact investing.

Guderley says, “it is inspiring to be part of the [Newsweek Expert] Forum and add my flavor of planetary thinking, regenerative culture, and venture capital connectivity. I am deeply grateful to be invited into this group of experts, change makers, and trailblazers. Always curious to connect with peers, community, and audience.”