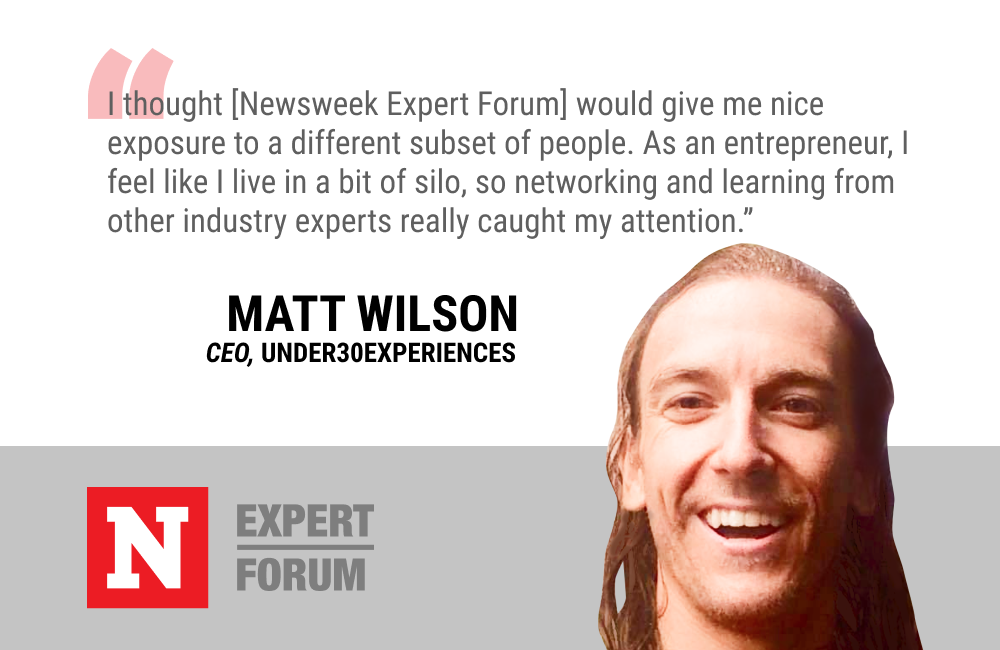 Matt Wilson and his business partner, Jared O’Toole, graduated from college at the worst possible time for job seekers: it was 2008 and the economy was in ruins. But the two both had entrepreneurial aspirations and they viewed the recession as an opportunity to strike out on their own. They reckoned they were not alone. “So many people in our generation were going to be forced into entrepreneurship,” recalls Wilson. “It was either that or sit on the couch and watch the interest on the student loan debt build up.” So he and O’Toole launched Under30CEO, a media site and membership organization that brought together aspiring young entrepreneurs for networking and advice sharing.

Their website got great traction, attracting half a million readers monthly. But by 2012, Wilson was burning the candle at both ends, working too hard and shouldering too much stress. So when he was invited on a trip to Iceland to explore the effects of climate change on young entrepreneurs in the tourism industry, he thought it would be a great way to unwind. “I didn’t really know anything about climate change,” he recalls. “But I could literally see the glaciers melting before my eyes. That trip was transformational for me.”

Wilson had grown up hiking, skiing, and mountain biking, but the New York City startup scene was consuming all his time and energy and he had lost his connection to the outdoors. “I called Jared during that trip and said, ‘there’s an opportunity in Iceland for us to bring some of our blog readers on a retreat,” he says. That retreat planted the seed for a new business, Under30Experiences. Wilson and O’Toole leveraged the community they had already built through Under30CEO to start organizing trips for the same demographic.

Originally, the idea was to offer retreats for young entrepreneurs, but the founders quickly realized that there was more opportunity in a broader focus. “A really pivotal moment for us was when we decided to be an inclusive group rather than an exclusive group,” says Wilson. Their niche would be travelers between the ages of 21 and 35 who were neither budget nor luxury travelers, but whose needs were somewhere in between. They also decided to make their trips relatively short — many are a week or less — to attract busy young professionals who don’t get a lot of time off. “There was student travel, and there was old folks travel, but there was really nothing for this 21 to 35 age group,” says Wilson. “Once we narrowed our niche, it really took off and we realized we were on to something.”

Newsweek Expert Forum, Wilson says, will give him the opportunity to connect with a broad range of professionals. “I really like meeting people from different sectors,” he says. “This has the potential to be a very positive experience professionally."

Wilson ran Under30Experiences and O’Toole managed Under30CEO for a couple of years before they sold the latter in 2016 and began devoting themselves full-time to the travel brand. Under30Experiences has grown tremendously; it was #801 on the 2018 Inc. 5000 list of fastest growing private companies in America. Pre-COVID, the company was running up to 300 trips a year to destinations such as Costa Rica, Iceland, Machu Picchu, Brazil, Belize, Bali and many others. While the trips aren’t marketed with sustainability at the forefront, Wilson says “with our generation it’s almost implied or expected that companies they do business with have respect for the environment and are socially responsible.” And so Under30Experiences is careful to check those boxes by taking travelers off the beaten path to avoid “over tourism” in popular areas, and to economically support indigenous communities whenever possible.

COVID-related travel restrictions have been tough on the company, so Wilson and O’Toole were compelled to pivot. They cut expenses dramatically and, last summer, began focusing on U.S. travel to national parks. “It’s been pretty successful for us,” says Wilson. “People stayed in single tents, and were able to have appropriate social distancing while being in the great outdoors.” With an increasing number of countries opening their borders, the company will resume international trips this year. To whet customer’s appetite for more travel when the time is right, Wilson has also written a book called The Millennial Travel Guidebook: Escape More, Spend Less, & Make Travel a Priority in Your Life.

Wilson says he was eager to join Newsweek Expert Forum because “I thought it would give me nice exposure to a different subset of people. As an entrepreneur, I feel like I live in a bit of silo, so networking and learning from other industry experts really caught my attention.” Like many entrepreneurs, his professional network and the people he follows on social media “are all entrepreneurs and venture capitalists and it starts to be a little bubble.” Newsweek Expert Forum, Wilson says, will give him the opportunity to connect with a broad range of professionals. “I really like meeting people from different sectors,” he says. “This has the potential to be a very positive experience professionally."