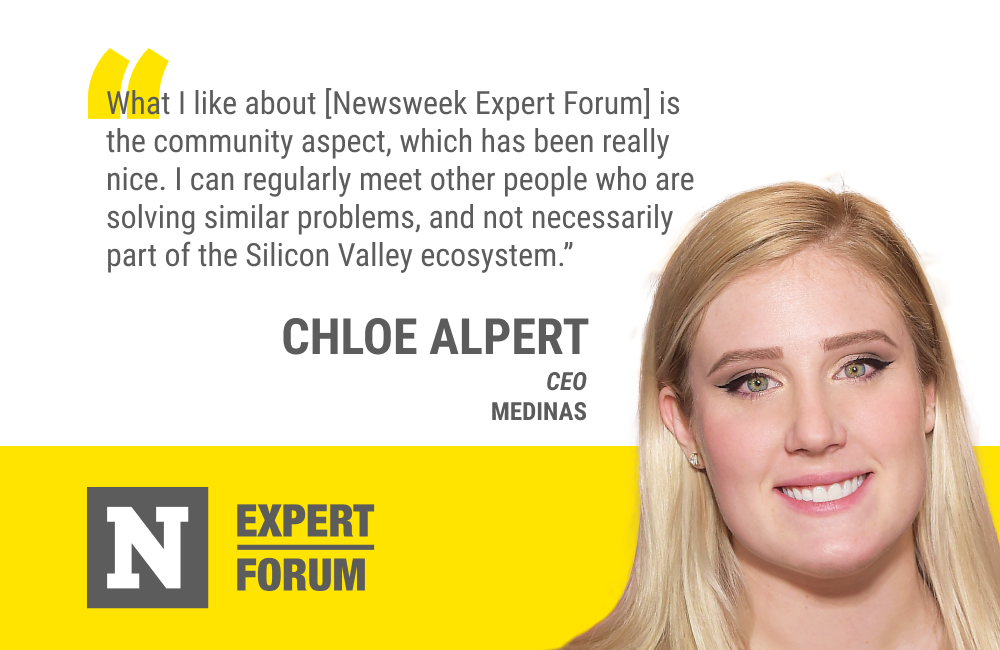 When Chloe Alpert’s grandmother was in the hospital with terminal brain cancer in 2015, Alpert spent a lot of time walking the hallways, poking her head into various rooms. She noticed that one patient room was packed with large equipment and was told by a nurse that the hospital was waiting for a scrapper to collect it. “That kind of blew my mind,” recalls Alpert. “Because I saw this room full of thousands of dollars worth of used equipment that looked like it was new. And you juxtapose that with these massive hospital bills we were getting while my grandmother was in decline. There was something wrong, but I didn’t quite know what it was.”

Alpert, who had previously started a business called Happy Pay, knew instinctively that there was an entrepreneurial problem to be solved. She kept that hospital experience in the back of her mind, but took a job with Teespring, a marketplace where people create and sell custom apparel online. There, she met two of her future co-founders, Tim Growney and Jesse Avshalomov. “Every weekend, we would hang out and work on side projects,” says Alpert. “I said, ‘hey I have this idea for this used equipment thing and I don’t know what it is yet.’” She also sought advice from Romy Seth, a friend with a background in investment banking who was familiar with the healthcare industry. He would later join them as a part-time co-founder.

Alpert, Growney, and Avshalomov spent eight months crafting a business model and hypothesis, then sought advice from Alan Weinstein, who had founded Premiere, one of the largest group purchasing organizations for hospitals. “We spent six hours in a conference room in Chicago just whiteboarding with him and talking about this idea we had,” Alpert says. In 2018, the co-founders launched Medinas, a marketplace for reusable medical equipment, and subsequently raised $5.5 million in seed capital.

The original idea was to build a technology-enabled brokerage business for equipment. “What was very apparent very quickly for us was that the act of going into hospitals and just buying equipment outright, and then flipping it to a buyer was a little bit of a slimy process,” says Alpert. “And it was a fundamentally combative relationship with the hospital.” So the company pivoted to a marketplace model that helps hospitals connect with other hospitals in their network to sell or redeploy their equipment.

“I think it's really cool that [Newsweek Expert Forum has] created a way for busy people to participate, and to share opinions and insights and connect with other people of a similar and greater caliber."

Medinas’s software, which hospitals use free of charge, includes a proprietary algorithm with 20 million data points on different pieces of medical equipment. The software keeps track of a hospital’s equipment inventory and its true market value. “We’re basically a consignment marketplace,” says Alpert. “Think about it like The RealReal. They take items on consignment, do the inspection, verify that it’s authentic, list it on their marketplace and then take a percentage of the final transaction. That’s very much a similar service that we provide for hospitals.”

The healthcare supply chain is a “multi-$100 billion opportunity that is ripe for innovation,” says Alpert. But it’s also an industry that’s entrenched in the status quo, and in which there’s resistance to dramatic change. Her long-term vision for Medinas is ambitious — she wants the company to be the preferred destination for procurement and supply chain for healthcare systems. By starting with equipment disposition, Alpert thinks the company will prove its value by “making hospitals nearly 50% more for their used equipment than any other player in the market today, and saving them about 75% of the time that they originally spent for this process.”

The pandemic was tough on the company, since hospital systems were almost singularly focused on COVID. And lockdowns meant that Medinas could no longer go into hospitals to collect and then deliver used equipment. To remain relevant and active with clients, Medinas began helping hospitals procure much-needed PPE, a move that kept revenues steady but that decimated the company’s margins. “We're coming up for air now, with a major contract on the table that's worth about eight figures for us,” says Alpert.

As a young CEO, Alpert says she values Newsweek Expert Forum because “talking to people who are older and more experienced than I am has really been fabulous. What I like about the forum is the community aspect, which has been really nice. I can regularly meet other people who are solving similar problems, and not necessarily part of the Silicon Valley ecosystem.” Connecting with people from various geographic areas and from other industries gives her exposure to perspectives that her local network may not offer. Alpert also enjoys contributing to Expert Panels. “I think it's really cool that they've created a way for busy people to participate, and to share opinions and insights and connect with other people of a similar and greater caliber.”