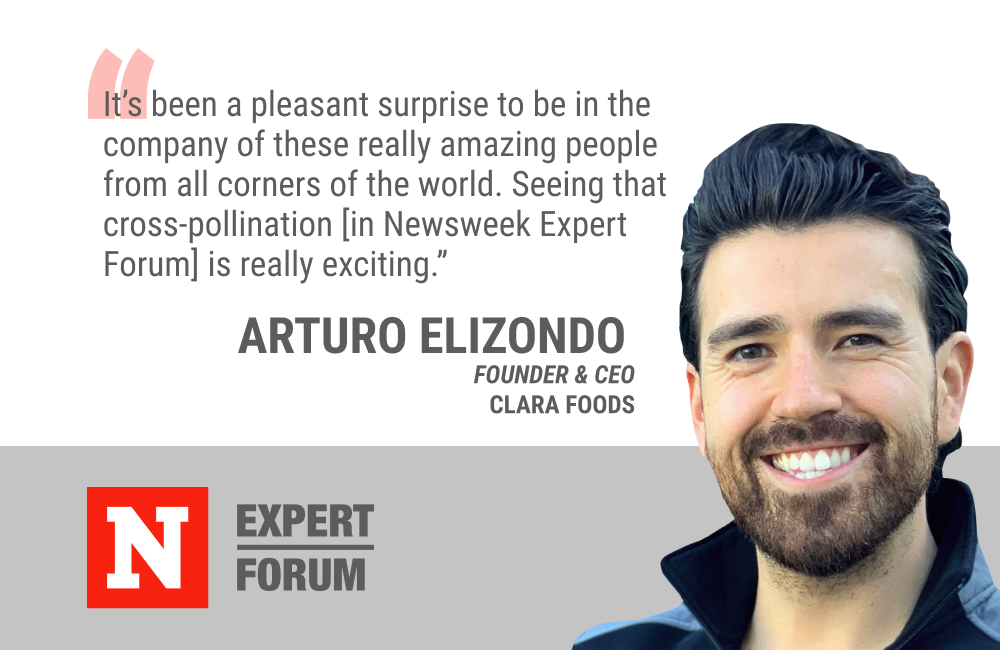 Arturo Elizondo’s passion for creating sustainable foods grew from a short stint at the USDA Food Safety and Inspection Service, where he “saw things I just couldn’t unsee,” he says. “I never thought about where my food came from.” Elizondo grew up in Texas eating barbeque every Sunday with his family, but he says that global trends and his experience at the USDA more than a decade ago compelled him not only to change the way he eats but to start Clara Foods. “My purpose in this world is to fundamentally change the way that the world consumes so that we don't have to use industrial animal agriculture to make food that's tasty,” he says.

It’s an enormous goal and one that Elizondo felt strongly enough about to abandon a job offer in the Obama administration and buy a one-way ticket to San Francisco with no job and no place to live. “I knew that I had to at least be out here, trying my best to do something to make a difference in some shape or form,” he says.

A friend invited him to a food tech conference where he ended up meeting his future co-founders, Dave Anchel and Isha Datar. Anchel, a biologist, shared an idea for making egg whites without chickens and Elizondo was intrigued. At the time, companies such as Hampton Creek (now Just), Beyond Meat, and Impossible Foods were starting to gain traction with foods created with plant-based proteins. “When I realized that there were companies actually using technology and using capitalism to change at a global level, I was sold,” says Alizondo.  Because I knew that it was going to be incredibly difficult to change consumer habits.”

In 2015, the founders applied and were accepted to IndieBio, a biotech accelerator program that gave them $50,000 and lab space to build prototypes. Within three months, says Elizondo, Clara Foods was the first company to raise outside investment capital while still in the accelerator. That $2 million in seed funding allowed them to begin hiring scientists. The company subsequently raised two more rounds of capital and now has $56.8 million in funding.

“I have a perspective around what the future of food looks like, and I was really looking for a way to share that with people who may not be aware of the revolution that is happening in our space.”

Last year, Clara launched its first product — animal-free pepsin — and is working with a Fortune 500 ingredients company called Ingredion to distribute it. Pepsin, traditionally sourced from pigs, is an enzyme that’s widely-used as an ingredient in everything from chewing gum to stomach remedies. Clara’s animal-free pepsin allows companies to label their products as vegan, Kosher, and Halal, and removes the ingredients from the vagaries of the global supply chain. For instance, swine flu killed 200 million pigs in China in 2019, resulting in severe supply chain disruptions. More recently, COVID shed light on the vulnerability of animal-based supply chains.

Next on deck is animal-free egg protein. Using yeast, sugar, and fermentation, Clara is creating proteins that are essentially the same as those that come from chickens. Those proteins will go into creating egg whites that Elizondo says mimic and even outperform the qualities of chicken-based egg whites (think fluffier macaroons). Eggs, he says, are a huge opportunity. “Less than 1% of the $200 billion egg market has been replaced by anything that’s not an egg,” Elizondo says. At the same time, there’s growing consumer demand for animal-free food. “I think Ingredion and a lot of others in the space are very well aware that this is no longer a fad, but truly a structural consumer trend,” he says. “There’s a real market for alternative proteins where two years ago, people would have told you that it’s pretty far-fetched.”

Unlike companies such as Just or Impossible Foods, Elizondo says that Clara is largely a B2B company and is “not here to build a consumer brand.” His goal is to support large consumer packaged goods companies and food startups as a provider of sustainable, animal-free ingredients. “Our bread and butter is being the Intel of protein,” he says. There may be some Clara-branded products in the pipeline, Elizondo hints, but their primary purpose will be to illustrate to consumers and enterprises the efficacy of the company’s ingredients.

As a member of Newsweek Expert Forum, Elizondo says he’s pleased to be affiliated with a brand that was “a rich source of content when I was growing up.” He was drawn to the forum because “I have a perspective around what the future of food looks like, and I was really looking for a way to share that with people who may not be aware of the revolution that is happening in our space.” He’s also found that the curated network of members has been valuable and inspiring. “It’s been a pleasant surprise to be in the company of these really amazing people from all corners of the world,” says Elizondo. “Seeing that cross-pollination [in Newsweek Expert Forum] is really exciting.”