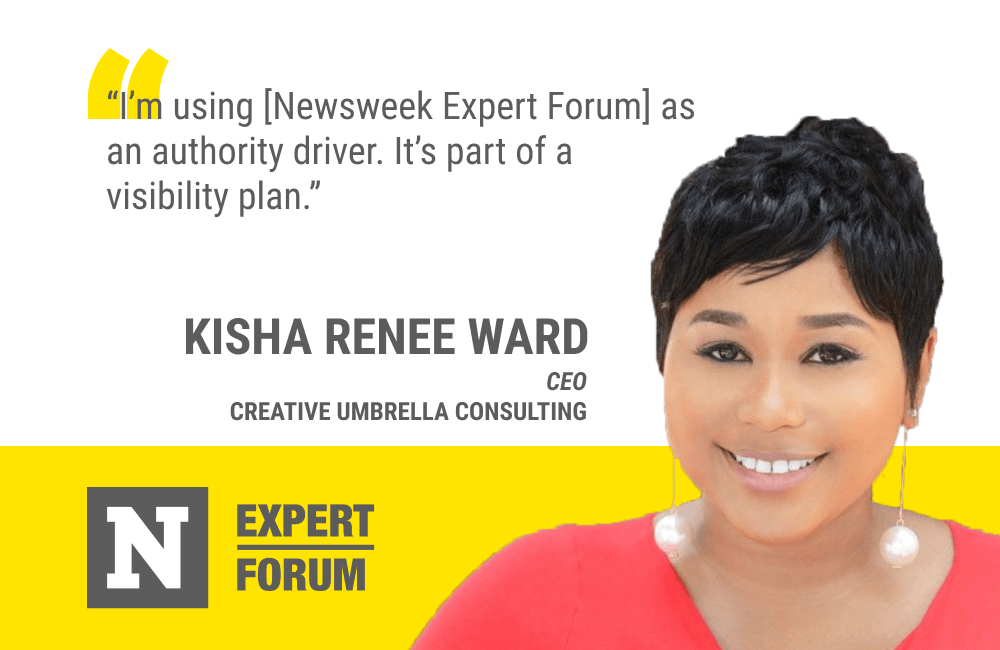 For many years, Kisha Renee Ward drove around with a resignation letter in her glove compartment. She valued her job as sales development manager at Comcast, but she had a “side hustle” helping small businesses create online footprints. “In 2006, when I started my company, the focus wasn’t to leave corporate America, it was just to have a second income and test out entrepreneurship,” she says. Eventually, she promised herself that she’d quit her job when she felt confident that she could replace the income with her own business. But the longer she became accustomed to having two salaries, the tougher it was to give that up. But in 2016, she took the leap. Or, rather, she was pushed. Comcast laid her off and she opted to devote herself fulltime to her own business, Creative Umbrella Consulting.

When she first started her company as a side gig, Ward says she focused primarily on making money. She worked with restaurants, gyms, auto repair shops, salons and other small businesses, helping them navigate the new world of online marketing and social media. But after she was laid off, she says, “I realized that my business had only been revenue-driven and that the only goal was to leave corporate America. I didn’t have core values. So I had to set a vision and a North Star for my company and build a legacy that was no longer about money.”

A year into her journey, she wrote a book, Straight Out of Corporate, that chronicled her journey from the corporate world to entrepreneurship and the lessons she learned along the way. To her surprise, she began landing speaking engagements, many of them with large corporations who wanted their employees and leadership teams to absorb some entrepreneurial wisdom. She also found that her business shifted away from helping mom and pop businesses get online to working with larger companies that wanted to better communicate their own brand messages to specific audiences. Now, she says, “we help corporations and consultants attract diverse audiences, specifically Black professionals because we find that a lot of companies are having challenges communicating with that audience.”

If you’re going to work with corporations as a consultant, you need to push through the noise and share your knowledge and your thought leadership online.”

The pandemic, however, gave her the opportunity to double down on digital transformation work. “I tripled my business because companies were in a frenzy, reaching out to me wanting to go online,” says Ward. “A lot of people who had tabled a big rebrand or digital transformation in 2019 reached back out. In 2020, it was a top priority.” Currently, she has a waiting list of approximately 50 thought leaders and corporations that want to work with her. She has a diverse team of five employees and approximately 20 vendor relationships that she leverages on a project basis. While she doesn’t plan to increase her staff to handle the extra work, she’ll consider seeking out more vendors.

Ward says her biggest competitive advantage is that “a lot of my customers represent my demographic in the marketplace.” Many of her clients want to reach Black professionals and they now realize that they “can’t leave that to someone who has no experience as a Black professional in corporate America. Because it’s a dead giveaway if you’re talking to me and you don’t know my language. It sounds disingenuous.”

She coaches her clients not only to map out their core values and vision, but to focus on what they’re saying and the tone of the message. She encourages them to take a stand and, rather than pumping out generic marketing campaigns, to focus on specific segments. That makes some leaders nervous because they’re afraid of offending potential customers. Ward’s response: “The right people are going to hear you differently. Everybody’s not your customer anyway. You just need to tell people what values are important to you, communicate that in a way that doesn't offend, and with a personality that connects with your customers.”

To help communicate her own message and core values, Ward shares content via Newsweek Expert Forum. “If you’re going to work with corporations as a consultant, you need to push through the noise and share your knowledge and your thought leadership online,” she says. “I’m using [Newsweek Expert Forum] as an authority driver. It’s part of a visibility plan.”