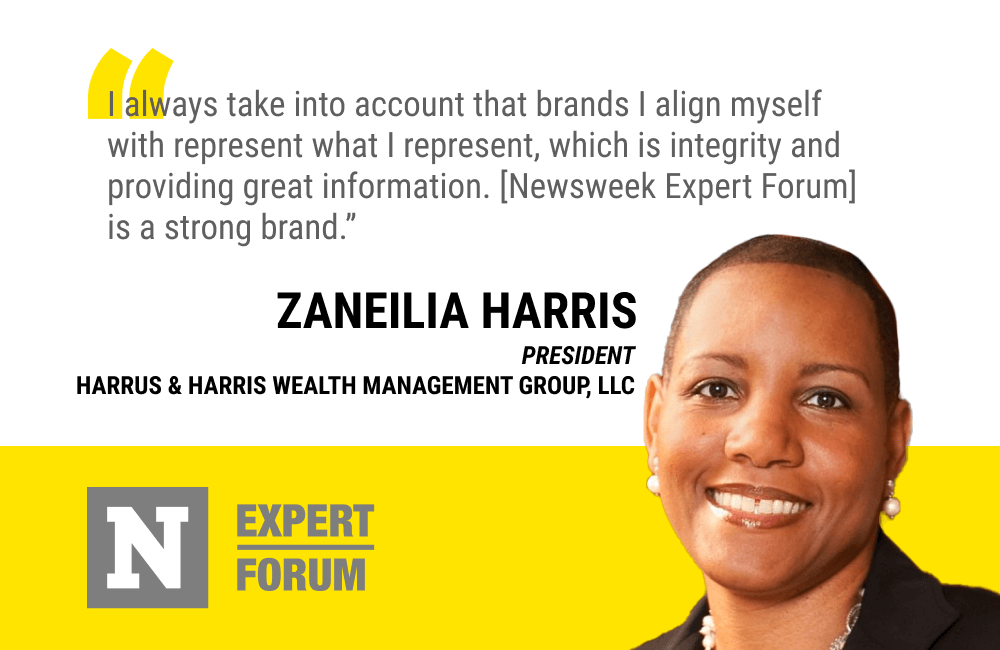 Zaneilia Harris founded Harris & Harris Wealth Management to help successful African American women make smart decisions regarding their money.  “The industry is still white, male dominated,” she says. “I wanted to talk to women like me — ambitious women who are smart and educated and want to make sure that they're financially secure.”

Harris was inspired by her grandmother, the primary breadwinner of her household, who struggled to make sure the family finances were in order. “I saw strength, but I also saw the other effects of her caring that way for the family,” recalls Harris. That experience was the driving force behind her desire to be a better steward of her own finances and, ultimately, to help other women do the same.

Before starting her own company, Harris worked in financial management at several large firms, including PricewaterhouseCoopers, Edward Jones, Citi, and Grant Thornton. Each position taught her skills that she brings to her relationships with her clients, she says. Most importantly, she was struck by how the financial services industry seemed to ignore the African American community. So she decided to start her company, first focusing on investment management, and then transitioning to become a certified financial planner and start her own registered investment advisory firm (RIA).

Harris worked with a coach who encouraged her to “focus on who I was, because a lot of times the clients you attract are a lot like you.” She came up with a brand called Finance ‘n Stilettos, wrote a book, Finance 'n Stilettos: Money Matters for the Well-Heeled Woman (she’s a lover of shoes), and started a blog. To help market her firm and to further differentiate herself, she hosted events in her home, inviting affluent women for lunches and dinners that often featured live music and guest speakers. “It made people aware of who I was, and awareness is a very important part of marketing,” she says. She also made herself helpful to journalists and became a member of CNBC’s financial advisory council to help establish herself as a thought leader.

“I really wanted to expand my network and that was the major force driving the decision to join [Newsweek Expert Forum]."

Eventually, Harris found herself attracting clients who were very much like her — executive women, typically over 45, who are smart and strategic. “She knows how to save and has saved, but doesn't necessarily feel that she has someone who she can truly trust and be vulnerable with when it comes to talking about different aspects of her life,” says Harris of her typical client. While she’s inclusive and willing to take on a variety of clients, most of her clients are African American women. “That’s who I attract, so I’m leaning into it,” she says. Harris also notes that many of her clients are women who are unmarried, divorced, or the primary breadwinner in their family. “The two biggest concerns are they want to make sure they can live the life they want when they transition into whatever retirement looks like to them, and they want to make sure that their children are taken care of.”

Harris says she’s seen a significant uptick in her business — between 10 and 20 percent — in the past year. “Because of George Floyd, there are a lot of African Americans who are now deciding that they want to spend their money with a Black-owned business, so they’re seeking me out,” she says.

As a Newsweek Expert Forum member, Harris plans to gain brand visibility and share her particular perspective on finance, race, and wealth management by publishing articles and contributing to Expert Panels. “I really wanted to expand my network and that was the major force driving the decision to join,” she says. “I always take into account that brands I align myself with represent what I represent, which is integrity and providing great information. [Newsweek Expert Forum] is a strong brand.”