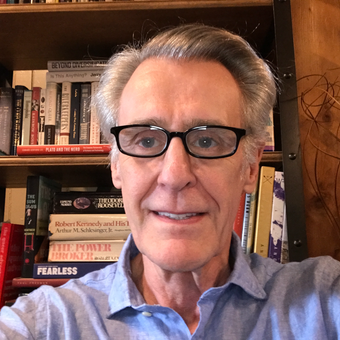 20-year international communications executive, equity holder in tech companies during the ‘90s, and a social entrepreneur in 1999. Co-founded and acted as the initial funder for CreakyJoints, an international service organization for people with arthritis. CreakyJoints became part of the Global Healthy Living Foundation, which he also co-founded. Focuses on health policy, advocacy, research, education and patient support. Also CEO and co-founder of TGI Healthworks, a healthcare research and marketing company. Previously a contract writer for The New York Times and other daily newspapers and automotive publications. Published first hardcover, The Complete Manager’s Guide to Promotional Merchandise (Dow-Jones Irwin 1989) – named one of top business books of the year. In 2005, became the first out gay coach at the U.S. Military Academy as swim coach of the West Point Triathlon team. Published Overachiever’s Diary in 2007, recounting team’s rise to national prominence. Proceeds from book go to West Point. Competitive open water and pool swimmer. 13 FINA-sanctioned medals. Currently is the triathlon swim coach at Columbia University, New York City. Board of visitors College of Business Butler University, Indianapolis, 2003-08. Graduated with B.S. and B.A. in Journalism, 1972. 38th Infantry Division, Headquarters, Indiana National Guard, 1972-1978. Chairman of Anti-Bias Commission, Rockland County, New York, 1994-1996. Chairman of the Board of CANDLE, Rockland County, NY, non-profit 1994-1997. Former board of the Victory Fund, Washington, DC, Lambda Chi Alpha Educational Foundation. Current member of Knights Out, U.S. Military Academy and board member of AIDS United. From 2012-2018 accepted a position in the Obama administration serving on the Army Education Advisory Committee. Recognized for service in the Congressional Record. Louis and his husband, Jim Bumgardner, live in Upper Nyack, NY.

The Federal Trade Commission has an opportunity to impact healthcare for Americans.

14 Essential Qualities of a Great Leader

An exceptional leader is defined both by the accomplishments of their organization and their personal characteristics that contribute directly to that success.

How Medicare Gets It Right and Wrong

Why do seniors who need health insurance the most pay more than those who don’t?

Creating a workplace dedicated to employee development helps build a culture that retains and attracts employees.

The Global Healthy Living Foundation is a 501(c)(3) non-profit organization whose mission is to improve the quality of life for people living with chronic illnesses (such as arthritis, osteoporosis, migraine, psoriasis, and cardiovascular disease) by advocating for improved access to health care at the community, state, and federal levels, and amplifying education and awareness efforts within its social media framework. GHLF is also a staunch advocate for vaccines. The Global Healthy Living Foundation is the parent organization of CreakyJoints®, the digital arthritis community for millions of arthritis patients and caregivers worldwide who seek education, support, activism, and patient-centered research through ArthritisPower® (ArthritisPower.org), the first-ever patient-centered research registry for joint, bone, and inflammatory skin conditions, and hosts PainSpot (PainSpot.org), a digital risk assessment tool for musculoskeletal conditions and injuries. Visit www.GHLF.org for more information. The Global Healthy Living Foundation is committed to equal opportunity for all full- and part-time employees, interns and contractors. It is GHLF policy that no one shall be treated differently, separately, or have any action directly affecting them taken on the basis of race, religion, national origin, marital status, sex, sexual orientation, gender identity, military status or disability where they are otherwise qualified or could be with reasonable accommodation. The immediate remedy for any act of discrimination shall be to end it, treat the individual equally, and, as much as practically possible, to eradicate any effects of discrimination. Discipline will be imposed where appropriate. Web sites: http://www.GHLF.org http://www.CreakyJoints.org http://www.ArthritisPower.org http://www.50StateNetwork.org http://www.FailFirstHurts.org http://www.CreakyJoints.org.au Facebook: https://www.facebook.com/creakyjoints Twitter: @GHLForg, @CreakyJoints Instagram: @Creaky_Joints