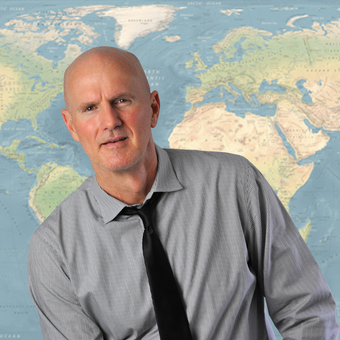 Cruse has conducted business in over 80 countries while traveling over two million miles worldwide for over 30 years. In 2001 Cruse founded Logenix International, Inc. Logenix was an integral cog in the rebuilding of Afghanistan, the reconstruction of Iraq, and today is the recognized industry leader for health, water and other humanitarian infrastructure development programs across the developing world. Profiled in Forbes Magazine, Financial Times, and in industry magazines such as Logistics Today, Cruse and his company are involved in events and projects that make world headlines. Prior to Logenix he founded Matrix International Logistics in 1986 which had him traveling to every hotspot around the globe growing his business. Matrix was first recognized in 1991 by INC. Magazine listed #81 of INC’s 500 Fastest Growing Private Companies in the U.S. In 1992 Cruse organized one of the very first US-Russian Joint Venture Companies. The company became immersed in every major U.S. Government activity in the New Republics; from operating the largest humanitarian relief program of the last fifty years, to delivering critical equipment for nuclear reactor modernization, to transporting Nunn-Lugar weapons dismantlement equipment to the former 'secret' cities of the Soviet Union. By 1995 Matrix Russia had become the largest privately held freight forwarding operation in the NIS. In late 1996 Matrix, by then an 85 million dollar company, was bought by an investment group led by the former Secretary of the Treasury, William Simon. Cruse’s career journey, along with the realization that the down-in-the-trenches, practical training necessary to navigate the real world of international commerce is the inspiration for his highly acclaimed book, LIES, BRIBES, & PERILS: Lessons for the REAL Challenges of the Global Arena. The book is currently utilized by over a dozen universities in both graduate and under graduate studies.

Lessons in Leverage: What International Merchants Taught Me About Business Negotiations

Logenix is recognized as the preeminent logistics provider for global health programs, disaster relief, infrastructure and development projects, security and contingency operations, as well as other high-profile projects in the world’s most challenging regions.