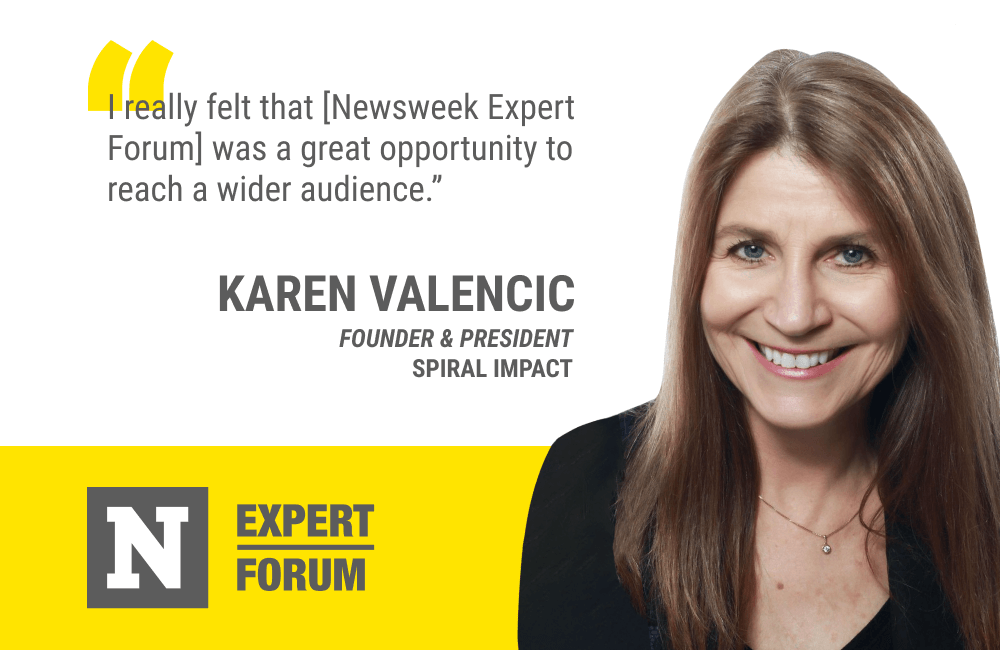 Karen Valencic remembers clearly the “aha” moment that would eventually inspire her to launch Spiral Impact©, a leadership and conflict resolution consultancy that draws upon martial arts concepts. She was at a dental conference in 1990 with her then-husband and heard a presenter named Tom Crum talk about conflict resolution. “He was grounded in Aikido, which I had heard about,” Valencic recalls. “The content was one of those things that really shifted my life.”

She had been the first female engineer in her division at General Motors and while she loved her job, she found herself constrained when it came to communicating her ideas and being heard in a way that made her feel valued. She left the job when her first child was born and was thinking about next steps when she heard Crum speak. “I not only got that what I was doing in my communication was really limiting me, but I also got some clarity around what I wanted to do with my life,” Valencic says. She started studying with Crum and also learned Aikido, a Japanese martial arts practice that uses position rather than force to diffuse conflict. “I took Tom’s work, which is steeped in Aikido, but I expanded on it a lot,” she says. “And I created this model I called spiral impact. My goal is to share that as much as I can with organizations and individuals, so that they have tools so they don't have to go to battle.”

When she’s working with clients to improve communication skills, Valencic uses physical analogies. “I start out with a simple example of the difference between using a hammer and nail and a screwdriver,” she says. “It’s the difference between force and power.” A hammer delivers constant force while a screwdriver requires a little initial force, and then rotational power. “The push is good, because that's where innovation comes from,” she says. “But most people push too long, too hard or too fast. And that's when you get dysfunctional conflict. We can always justify pushing, but if we really want something to change, pushing is the last thing that we should do.”

Rather than pushing forward with a point of view, Valencic coaches clients to stop making statements, start asking questions, and acknowledge the other perspective. She also teaches them how to be centered and calm in the face of conflict — a key component of martial arts. Her methods, she says, can be used with any personal interaction, whether personal or professional.

For 25 years, Valencic worked primarily with hospitals but found that her client base shifted considerably during COVID. Her contracts were postponed or cancelled as many of her health care clients, overwhelmed by the pandemic, went into “survival mode.” Serendipitously, a second edition of her book Spiral Impact: The Black Belt Edition, The Power to Get It Done with Grace had just been released in March of 2020, giving her some attention and resulting in exposure to a broader range of clients in industries such as manufacturing, construction, and pharmaceutical. She’s also upped her public speaking game and has developed online content that is available on demand.

Newsweek Expert Forum appealed to Valencic because she saw membership as a way to spread her message at a time when people are more and more receptive to the concepts of mindfulness and emotional intelligence. “I really felt that [Newsweek Expert Forum] was a great opportunity to reach a wider audience,” she says. “I feel as much or more passionate about the importance of this work in conflict than I ever have.” She has contributed to Expert Forums and has also written by-lined articles. “It’s a feather in my cap when I’m doing marketing,” she says. Forum participation has also proved fruitful. “I’ve had a couple of Zoom calls with people in the forum which have been delightful,” she says.